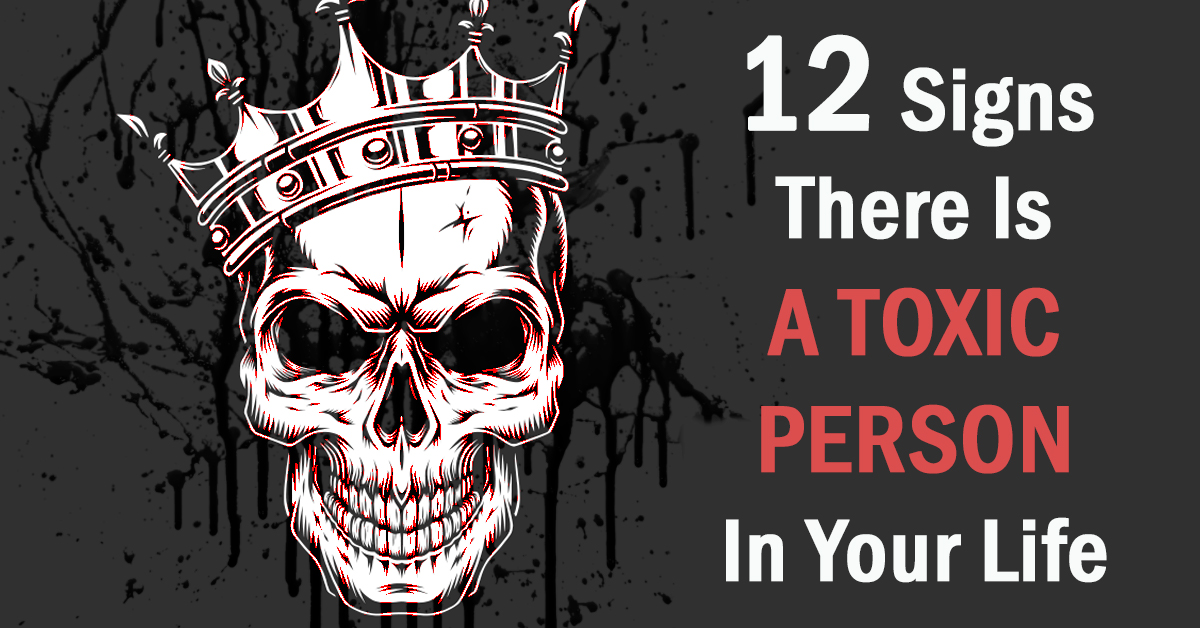 It is a well-known truth that there are plenty of toxic people out there. And, it is not that the people are toxic per se, but their behavior. However, this doesn’t make them bad people, it just means that they have certain behaviors that are damaging and have a negative impact on our well-being.

Below are 12 behaviors that show a person can be toxic to you.

1. They Are Always The Victim

In their head, no matter what the situation is – they are always right. Any problem that may occur it is always because of someone else’s actions. Even when it is their fault, they will never admit it.

When they are late for work, it is the traffic. When they break up, it is because of their partner’s jealousy and evil nature. You get the point. If you have someone in your life that always plays the victim card on you – lose him for good.

2. They Are Constantly Interrupting

These people are so focused on themselves and their ego is so high that they are forgetting their manners (if they have manners) when it comes to holding a proper conversation.

They constantly interrupt others when they are talking – which is really annoying. A normal person would apologize when they interrupt someone, but a toxic one never does. They are rude and clueless.

3. They Can’t Admit When They Are Wrong

A toxic person has to always be right. In their mind, there is nothing wrong with them and they never make mistakes. No matter how much evidence you have to the contrary – they will always find you guilty and they will never admit to their wrongdoings.

They can even become loud and aggressive to win the argument. This is an irritating and undesirable characteristic of a person.

4. They Are Bad Listeners

Even though it is normal to think what are you going to say while the other one is talking, this is not an effective technique. However, this behavior doesn’t make a person a bad listener.

What makes them bad listeners is plain disinterest and a lack of response and acknowledgment in the conversation. More specifically in what the other person has to say and just continuing to talk about themselves.

5. They Boost Their Own Ego

Let’s clear something up – an exceptional person doesn’t have to tell the world they are exceptional because their actions speak louder than words. A toxic person, however, is not modest when it comes to naming their qualities.

So, when you hear someone talking how amazing they are without being asked in the first place, know that you are dealing with someone who may not be that great.

6. They Are Attention Seekers

This one doesn’t require further explanation. These people need to be always the center of attention. They are always interrupting others because they want to dominate the conversation.

They are only happy when they talk about themselves. You can spot them easily because they are always the loudest ones in the group of people.

7. They Are Always Judging Others

You have probably heard someone making a rude comment about a person that they have never even met before on the basis that they can sense when something is wrong with a person. This is a red flag that says a lot about someone’s character.

People who are rude to someone they don’t even know, or worse, start making negative comments on their physical appearance – are toxic people that you don’t need in your life.

It is not hard to spot people who act like they are still in high school. They tend to look down on others and judge them only by their appearance. They see themselves as the best – others are poorly dressed, dirty, and unworthy if they didn’t have the latest fashion clothes or driving the newest car.

Toxic people consider themselves to be higher in class than everyone and that others should admire them.

9. They Are Disrespectful Of Everyone

Toxic people have no manners. They still cut people off in traffic, litter, don’t say ‘I am sorry’ or ‘thank you’ and so on. They have such disturbing social behavior that you can’t help but ask yourself how can anyone not be ashamed of themselves and what kind of parents raised these people.

10. They Are Physically Or Emotionally Abusive

This one is self-explaining. Any person who is abusive towards others can’t be a good person. Full stop. And, if we find ourselves being abused be it physically or emotionally, or if we discover that another person or animal is being abused – we should immediately report the case to authorities.

11. They Don’t Take Any Responsibility For Their Actions

This behavior goes hand in hand with #3, but it is much worse. These people cannot take responsibility for their actions because they don’t see a fault in them. They can often be found arguing with an authority figure and aggressively stating their illogical explanations.

12. They Have No Compassion

The most humane trait that a person possesses is their ability to feel empathy and compassion for others. However, these traits are missing from a toxic person. A toxic person is unable to empathize with others nor be compassionate towards someone.

If they show some compassion, it is usually fake and done in order to get something out of you.