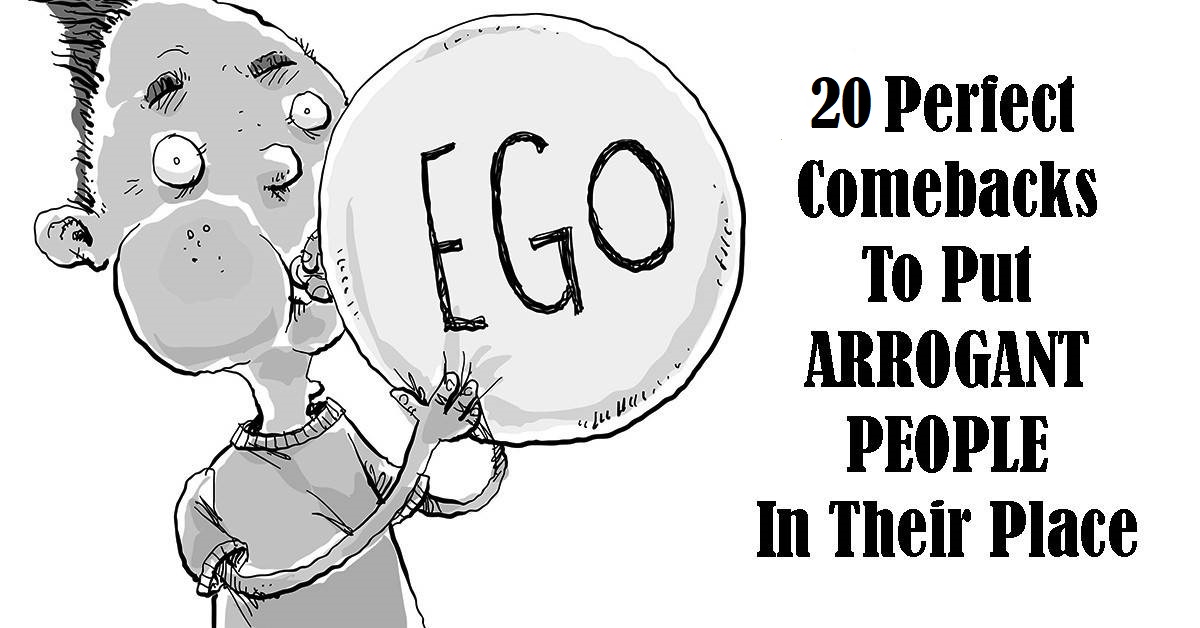 How To Put Arrogant People In Their Place?

If you’ve ever dealt with an arrogant person, and I’m sure you have since they lurk around every corner,  you know how hard it is to handle their fake superiority and snotty behavior.

Their entitlement, inflated self-esteem, haughty attitude, and lack of empathy make them insufferable.  To show that they’re smarter than and superior to you, they can brag for hours about their achievements, successes, and what an amazing life they have.

When interacting with an arrogant person, they can literally ruin your entire day unless you are equipped with a couple of clever comebacks. (1)

So, What Are Good Comebacks  For Dealing With Arrogant People?

In what follows, we’ve presented 20 comebacks that will help you put arrogant people in their place (and save yourself from their negative energy):

1. “Can you explain once and for all why you think you’re such a big deal?”

Arrogant people consider themselves more important and better than other people, and they think they’re entitled to special treatment. So, if you notice the arrogant person is acting like they’re superior to you, just ask them this question and watch them blush.

2. “There’re other points of view, you know that, right?”

Arrogant people tend to be self-opinionated too. They firmly believe that their own opinions are the only correct ones and they always have something negative to say about other people.

This behavior makes them truly insufferable, especially when they try to impose their negative opinion of other people on you.

So, when you see that someone is trying to do the same thing to you, just make sure you use this comeback and remind them that there are many who disagree with their opinion. (2) 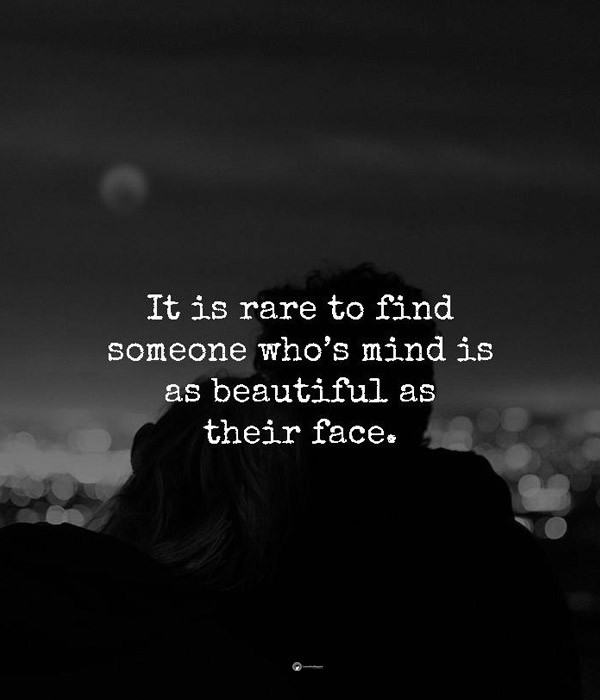 Arrogant people consider themselves better than others, so using this comeback will give the arrogant person a reality check.

Asking them why they think they’re better or more superior than someone else will make them feel uncomfortable since they won’t know what to tell you to prove their point.

4. “You didn’t intend to sound arrogant, did you?”

This is an excellent thing to say if you want to emphasize the arrogance in the arrogant person’s words. Whether they intended to sound arrogant or not, by using this comeback, you will make them feel uncomfortable and let them know that what they said is offensive.

In addition, you’ll also let them know that you don’t want to engage in this type of conversation, and they’ll see that they need to avoid making these types of remarks in the future when talking with you (or others as well).

To boost their ego and make themselves look better than the rest, rude, arrogant people will try to denigrate or belittle everyone who has different beliefs and opinions from them. They have no problem spreading malicious gossip and all kinds of lies about others.

So, when you notice that an arrogant person is trying to engage you in this kind of conversation, don’t hesitate to call them out on their behavior and let them know that you have no intention of playing their game of denigrating others.

6. “Do you realize how ignorant you sound?”

They probably don’t, so this response will cause them to reflect on their ignorance and want to prove their point, but chances are they won’t find any arguments to justify what they are saying.

Moreover, by using this comeback, you’ll let them know that you disagree with what they’re saying and that they need to watch their mouth when talking with you.

Well, this may be a little bit snarky response, and it will most probably offend the arrogant person, but it’s definitely one that will put them in their place and give them a reality check.

However, be careful with this comeback because if you’re not ready to get into a fight with the arrogant person, it may be better to avoid it.

If you want to put the arrogant person in their place and end the conversation, it’s best to use this straightforward comeback.

Using this comeback is a great way to tell the arrogant person that you’re no longer interested in what they have to say and that you have no intention whatsoever of continuing the conversation. Moreover, this response will make them think about what they just said, and they’ll likely see why it was rude or offensive.

This is a good comeback to use if you want to let the assuming and conceited person know that their arrogance is evident and that it is not something they should be proud of.

It’s not polite to answer someone’s question with a question, but when dealing with an arrogant person, everything is allowed.

This is a great comment to make if you want to question the arrogant person’s motives for their question if it’s rude and offensive. Of course, by asking them this question, they’ll have to explain their motives clearly, but it’s likely they won’t have the guts to do so.

If the arrogant person has said something that hurt your feelings, why not make a witty response and cut them to their core?

This comeback will help you continue in your beliefs in a fight, and it’ll also get the message across that you don’t care about what they think or have to say.

By saying this, you’ll likely catch the arrogant person by surprise, and they won’t know how to respond to it.

If the arrogant person has just said something bad or offensive and you want to make them reflect on it, ask them directly why they said it. In this way, you won’t pick a fight with them, but you’ll make yourself appear curious.

The point of using this comeback is to make the arrogant person see that what they just said was rude and unnecessarily mean.

13. “You know that saying such things makes you sound arrogant, right?”

Why would you tolerate someone’s rudeness, derogatory comments about others, and haughty attitude when you can call them out on their behavior and easily put them in their place by using this comeback?

By using this comeback, you’ll let the arrogant person know that you have no intention whatsoever of putting with the bullsh*t they’re saying.

Or you can make yourself sound more sarcastic by saying something like, “It’s not you the Earth moves around, it’s the sun.” Whichever of the two comebacks you’d choose to use, you won’t make a mistake because you’ll put the arrogant person in their place if they’ve tried to make the conversation about themselves.

15. “I apologize, I have no intention of tolerating your bullsh*t!”

Arrogant people can be insufferable. So, if you’re tired of listening to the arrogant person bragging about their achievements or how smart and good they are or gossiping and putting down others, then you can be sure that this comeback will put them in their place.

This response will let them know that you are sick and tired of putting up with their haughty attitude and that you have more important stuff to do than listen to them behave like they’re the center of the universe when they’re not.

Arrogant people have no filter. They just blurt out their thoughts without any consideration for the person standing opposite them and others as well.

So, if some arrogant person is saying things to you that are rude, condescending, and mean, thereby hurting your feelings, don’t think twice about using this comeback.  This will definitely make them realize the harm they’re causing you.

As I said, to elevate themselves, arrogant people will try to put others down in whatever way they can. They’ll try to judge and criticize others on the basis of their gender, education, job, sexual orientation, and you name it.

When you’re in the company of someone who is belittling others, and you’re fed up with listening to hostile stereotypes, you can easily put an end to this by suggesting that some loved one of yours belongs to the group the insolent and haughty person is denigrating or making fun of.

Don’t doubt that this comeback will make them realize that their disrespectful, inconsiderate behavior will not be tolerated. 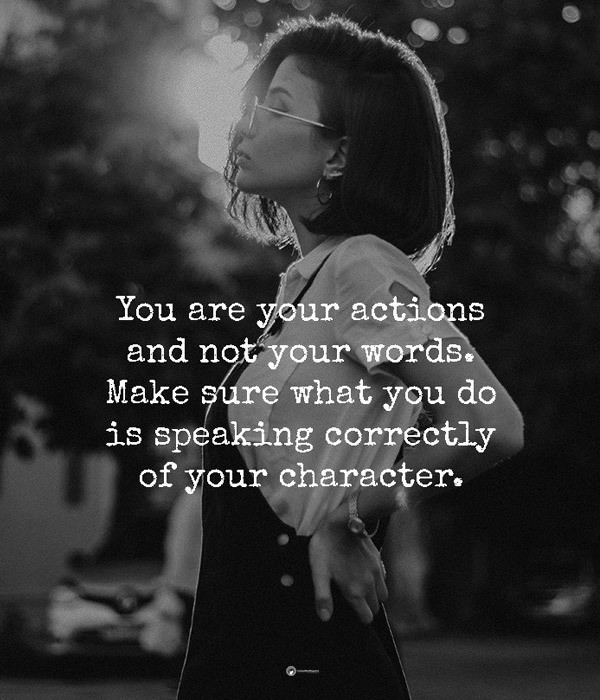 Well, most probably, that’s exactly what they meant to sound like. Anyway, although by using this comeback, you’ll allow the rude person to justify their behavior, you’ll also let them know that you disagree with their opinion and that they should watch their mouth.

You might think this is rude, but, at the end of the day, that’s the way the haughty person started the conversation. In fact, that’s the only way they talk with others.

So, even if “shut up” is not an expression that you’re used to saying, don’t hesitate to say it when you want to make someone stop saying hurtful and insulting words.

If the arrogant person has said something that offended you, instead of trying to come up with a snarky response or pick a fight with them, tell them, “thank you.”

By saying “thank you,” you’ll let the arrogant person know that you’re aware of their bad intentions and have no intention of tolerating their arrogant attitude, as well as show them that what they said didn’t undermine your self-esteem.