Do you often have the feeling that your guy is trying to control and manipulate you? Well, if the answer is yes, you should know that there’s a great probability you’re being emotionally abused, and you aren’t aware of it because you’re missing the signs.

Compared to physical abuse, the emotional one can be quite sneaky and very difficult to identify. You might be thinking that your beloved is loving, thoughtful, and wants the best for you, but in fact, he’s hiding his cruel heart and true face behind all this. To gain total control of you and make you feel insecure about yourself, he’ll often play devious mind games with you and use various manipulation tactics.

Emotional abuse can break your spirit, suck the happiness out of you, and damage your mental health. That’s why you need to be able to recognize the signs that your partner is an emotional abuser and avoid his toxic grip on you.

These are the 10 subtle red flags that your “awesome” guy is emotionally abusing you:

1. He is possessive of you.

If your partner is not the loving and sweet guy you thought he was, but a jerk in disguise, he’ll do whatever it takes to make you believe he loves you. He acts as if he possesses your body, mind, and heart. He tries to have a complete control over who you hang out with, where you go, and what you do. He never misses the chance to remind you he’s the one who knows what’s best for you and that you should allow him to guide you through life.

2. He isolates you from your family and friends.

He knows that you talk about your relationship problems with people who are close to you. That’s why he’s afraid that they can open your eyes about him and help you see his real face. To avoid this risk, he does his best to cut you off from your friends and family members. Moreover, he often plays the victim by saying things like: “You spend more time with them than with me. I’m afraid you don’t love me anymore.” Ugh, that just sucks!

3. He always makes you feel guilty about everything.

Whenever things don’t work well for him, like when he has a bad day or makes a mistake at work, you’re his perfect scapegoat. He blames you for every bad thing that happens in your relationship, especially when he’s the cause of it. He isn’t ashamed to tell you that he wouldn’t have to lie to or cheat on you if you paid him more attention and cared about his needs more.

4. He constantly criticizes you and reminds you of your mistakes.

He is well aware that if he succeeds in making you believe you’re not good enough and worthy, you’ll never let go of him. That’s why he frequently bashes and puts you down, especially in front of other people. He criticizes your dressing, your walking, and your talking. He also belittles you by constantly emphasizing your insecurities, fears, failures, and mistakes. He wants to diminish your worth and make you feel unconfident and embarrassed of yourself.

5. He does not let you pursue your dreams.

He feels intimidated by your dreams because he knows that if you decide to leave your comfort zone and try to fulfill your wildest dreams and passions, you’ll leave him. And that’s his biggest fear. Instead of being your greatest support and encouraging you to achieve your goals, he makes sure you see yourself as an incapable and incompetent person and even a fool for thinking that you can reach such high goals.

6. He makes you feel like you’re walking on eggshells.

He is highly unpredictable and frequently changes his behavior. He’s kind and sweet one minute and angry and cruel the next. From the moment you wake up until you go to bed, you feel uncomfortable, anxious, and worry not to say or do anything that could make him fly off the handle. You’re too careful not to offend him or provoke his anger, no matter if it’s unintentionally or on purpose.

7. He often compares you to other women.

His life is full of insecurities, so why shouldn’t yours be too? He wants to make you feel weak and less smart and pretty than other women so that you start thinking you’re lucky to have him in your life. He often tells you stuff like:  “She’s so accomplished and successful but she always makes time for him.” Or “Look at her. She’s so smart and attractive. You’ll never be like her.”

8. He hides his manipulation games behind the term “jokes.”

His sick mind is prepared to do anything. He’ll call you “stupid” or “nutty” and say that he’s “just joking.” Or if you try telling him you don’t like the way he talks to you, he’ll turn that against you and say that you don’t have a sense of humor and you’re too serious. Hearing such comments from the person you believe loves you will shatter your confidence and self-esteem before you know it.

9. He gets mad if you complain about his behavior.

Complaining about his actions is out of the question. He acts as if he always does the right things and is flawless. If one has to take the blame, that’s usually you. Even if he sometimes apologizes to you for something he’s done, promises to change his behavior, or says “I’m sorry”, he does this only to calm you down and make you believe he’s considerate and full of understanding. 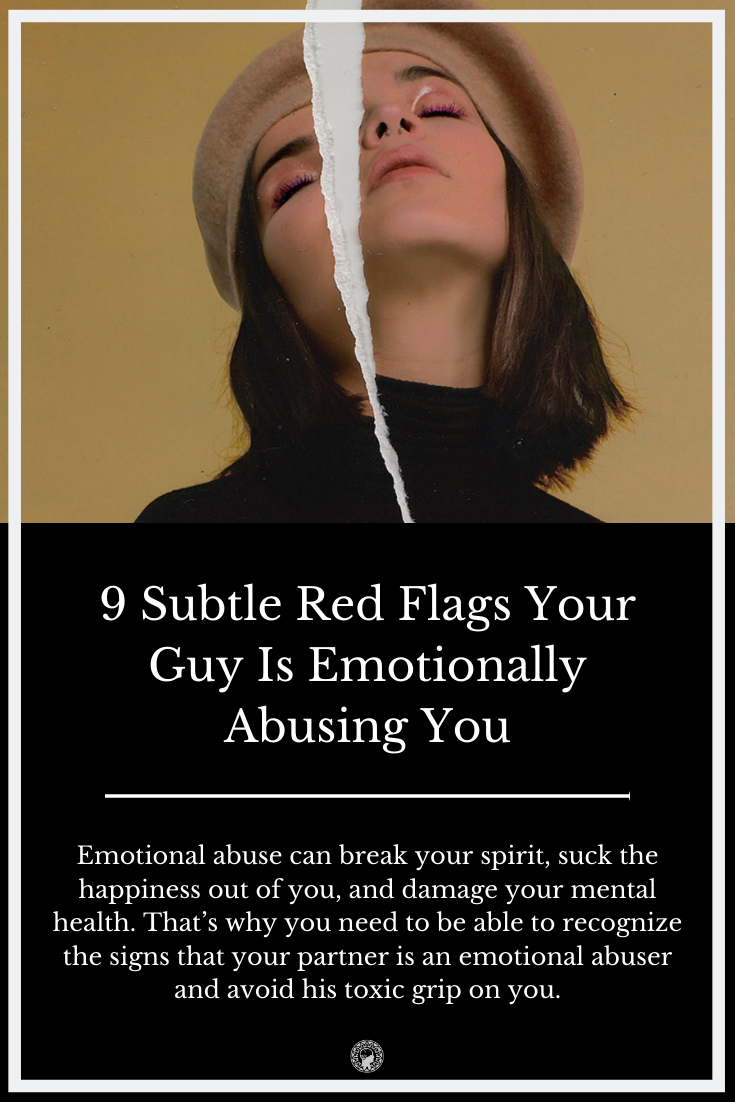