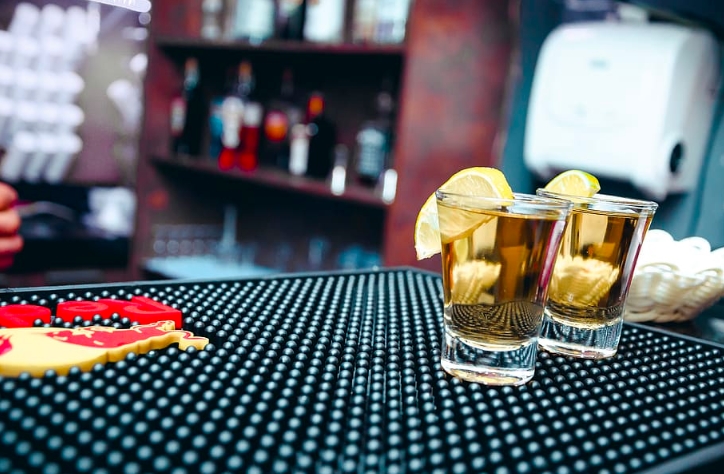 Drinking and casual drug taking are extremely common and it’s not unusual for alcohol and drugs to be seen as stress relievers. In reality, however, they can be the exact opposite.

Many people turn to a glass of wine or even a joint or line of cocaine to lift their mood, signify the end of a working day, and try to leave troubles behind for a while.

The truth is that whilst medical professionals don’t advise against moderate drinking, if alcohol is consumed for anything other than the pleasure of drinking it then there’s a danger of a vicious circle. Drink or drugs can become a crutch in our lives and they’re more likely to trigger and exacerbate anxiety, depression, mental health issues, and sleep problems than to solve them.

Do alcohol and drugs only harm mental health if you’re dependent?

We all know that alcohol and drugs can cause low mood, anger, aggression, and irrational behavior when someone is using them, but aspects of those symptoms can continue even after you’re sober.

During the hangover period or come down, issues of low mood, lack of motivation, and a sense of hopelessness are not at all uncommon even for infrequent users.

For anyone who turns to alcohol or drugs more regularly to try to build their confidence – or as a source of comfort or reward – the impacts can easily become more serious. Whilst all-out addiction is actually far more prevalent than many people realize, with many addicts and alcoholics managing to continue living a fairly normal life, there are even more people who harbor a form of alcohol or drug dependency that is perhaps not quite an addiction but is still harming their physical and mental health.

Alcohol is a causal factor in more than 60 medical conditions including a range of cancers. Depression is one of the health issues it is known to trigger and make worse.

Some drugs can trigger other mental health issues too. There is some evidence that cannabis can increase the chance of developing schizophrenia.

Psychosis – seeing or hearing things or believing untrue things – and psychotic episodes can also be caused by certain drugs.

But even when those extremes are not reached, alcohol and drugs are mind and mood-altering and cannot fail to impact emotional health.

What ex-addicts say about the relationship between drink, drugs, and mental health

Getting well from addiction usually requires a lot of introspection – with the deep analysis required of why drink or drugs have become integral into someone’s life.

Those who make a successful recovery very often realize that they were relying on drink and drugs to help them cope with past trauma, a mental health issue, or as a way of masking a problem such as anxiety or lack of confidence.

In addition to the people who reach a point where they unravel due to addiction, there are likely many, many more who rely on alcohol or drugs more than they’d like to (or are likely to admit) and can relate to the stories of people who have suffered addiction.

Ex-Premier League and England footballer Gary Charles fought alcohol dependency issues. He has said that binge drinking was a form of escape for him. He was never comfortable with the limelight that came along with his football career.

He said: “Alcohol and addiction are coping mechanisms people use to numb the pain, their thoughts, troubles and as a distraction from all of that.

“During my career, I was in denial of my drinking problem because I could go weeks, months, even years without a drink, but then I’d go on destructive benders for days at a time.”

How coronavirus has made things worse

The impacts of financial strain, job insecurity, and the isolating lockdown due to the coronavirus crisis are likely to have put more people in jeopardy of mental health risk in general and in relation to their drinking or drug use.

Mike Delaney is an addiction therapist who overcame drink and drug issues himself.

He said: “Right now for many, many people stress and anxiety are massive issues. People will be drinking more or taking more drugs than they normally would and becoming out of control is a real possibility for a lot of people.

The addiction treatment center where Mike is a clinical director has done some recent research taking a very focused look at addiction issues in one region of the UK: Greater Manchester. The report demonstrates not only the challenges for that region but issues that impact so many other communities.

In Manchester, a recent regional drive to understand the problems created by alcohol has led to a health and social care agenda that includes, as one of six aims, a desire to show people how to socialise without alcohol.

In one year the rate of hospital admission rate for mental and behavioral disorders due to the use of alcohol in England alone was 75.6 episodes per 100,000 people. The problem is replicated in many other nations. And far more people are suffering at home alone.

About 20% of Americans who have depression or anxiety disorders are thought to also have a substance use issue.

There’s a simple answer of course and that is to stop using alcohol and drugs! But not everyone wants to be completely abstinent and not everyone needs to be.

The best thing you can do is to try to take a step back and assess how much of an impact alcohol or drugs are affecting your wellbeing.

If you’re only drinking occasionally – and that means that sometimes you have a down day as you recover from a hangover – you may just choose to accept that as part and parcel of the life you want to live.

If, however, you’re concerned about your drinking or drug taking or, on reflection, you think that sometimes you use to drink or drugs as a way of trying to cope with other things, perhaps it is time to give your habits a little more consideration.

You could keep a diary for a couple of weeks and jot down the times and circumstances in which you drink or take drugs, then note the feelings you have afterward. You could also ask an honest and trusted friend or relation if they have any concerns about your drinking or drug use and how it impacts you. Sometimes it’s hard to see for yourself that a problem has emerged.

It may be that you see a negative pattern that leads you to drink or use and perhaps you’d benefit from beginning to dig into other solutions to those issues long before a more serious dependency takes you in its grip.