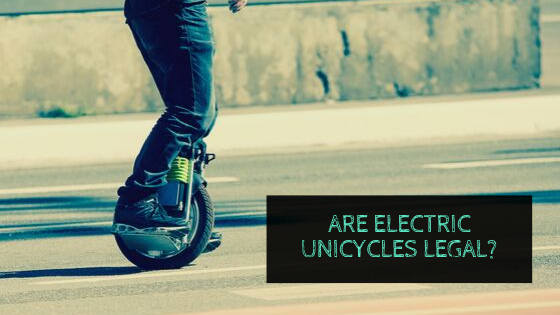 The electric unicycle is a relatively recent arrival on the market, and as a personal transport device – as well as a leisure vehicle – these clever and innovative little machines have kicked up something of a storm! You may have seen one – perhaps being used by someone in a city or town near you to get around more quickly than walking – or perhaps read about them and are here because you want to know more.

Either way, the fact is the electric unicycle is too versatile a device to overlook, and it is certainly going to become more popular in the near future. One of the concerns that potential buyers have is that of the legality of electric unicycles: are they legal to use in towns and cities of the USA, and are there specific laws relating to them? Below, we look at why there may be concerns among city councils and other such bodies as to the use of electric unicycles on city streets.

First, let’s look at what an electric unicycle is, and why it might be seen as a problem when used on, for example, the streets of New York. The electric unicycle is a compact device that consists of a solid body, within which is an electric motor and other systems designed to make it easy to ride. A USB-rechargeable battery is a part of the package, but the clever bit comes in the shape of how the device balances.

Bearing in mind you have only one wheel, you might think that balancing it – as with when you first learn to ride a bicycle – might be something of a dark art. In fact, and this is the very clever bit, the electric unicycle balances itself! It does so by way of gyroscopes and accelerometers – these are found in a variety of devices that require help with balance – leaving the rider free to control the device.

So, why is there a problem with them in the city? Most people will, of course, ride them on the sidewalk, where there will be people walking. The highest-performing electric unicycles can reach speeds of as much as 30mph. Even the less powerful can reach 15mph. If someone were foolish enough to ride at 15mph among crowds of commuters or shoppers, you can imagine the potential for accidents to happen.

The Law and Unicycles

Being relatively new to the market, the electric unicycle is in something of a grey area when it comes to the law. The law regarding riding them in built-up areas will also vary from state to state – even town to town – so it is advisable that you check out the law regarding unicycles where you happen to be thinking of using one.

In New York, for example, while there is still some confusion, it is a fact that another form of personal electric transport – the hoverboard – is not permitted for use within Manhattan (and other areas). It would follow, then, that the same is so for the rest of the New York boroughs, and that it is likely other large cities and towns will follow suit.

However, look around, and you will see riders in all areas of Manhattan. One rider, for example, attempted to test the law by riding close to police officers; they did nothing. When he spoke to them, they were either unaware of laws banning unicycles, or there were none.

We wouldn’t advocate breaking the law, so our advice is to be sensible if using your unicycle in a town or city, keep your speed down, and make sure you pay attention to others around you.