Being different and flawed in a world that is constantly judging you based on your appearance is a truly difficult thing. The pressure from society is sometimes unbearable. No matter how much you try, you cannot avoid feeling isolated and depressive after a certain time.

However, sometimes it is exactly those differences that help us find our right path in life and meet the ones that are meant to be with us forever.

The story I am about to tell you is only proof of that.

Meet Madden and Moon. Two most amazing boys. One of the human, the other one feline. Their story is unlike any story you’ve ever heard. Because they are both special.

Seven- year old Madden from Oklahoma was born with a common disability known as bilateral cleft lip and palate. Additionally, this little fella has different colored eyes which is a rare eye condition (one 1% of the population has it), also known as heterochromia iridium.

So, you can only imagine how life has been for him so far. This little guy was bullied and told that he is ugly. All of this truly broke his heart and forced him to go through a very rough period in life. Still, he remained strong and inspiring.

He even made an anti-bullying video encouraging people that different doesn’t mean ugly.

Meet Madden.Madden is an Owasso seven year old who was born with a bilateral cleft lip and palate. To date, he has undergone a total of six surgeries, and has many more to go.Madden is usually spunky, outgoing, friendly, kind, and fun! Unfortunately, he had a bully on the school bus this year that started affecting how he felt about himself.When his parents found out, they worked to help change his perception on bullies.Now that he’s back to his normal spunky self, he’s eager for everyone to know that he’s special. He wants to remind the world that being a “poophead” to someone really isn’t cool, as he shows you in his video…….Then, if you feel like it, share his message with others.

Posted by Owassoisms on Wednesday, June 7, 2017

One day, while scrolling through her feed, his mother saw a picture of a kitten that was up for adoption. Apparently, the kitten was posted in a cleft moms’ support group. The moment she looked at the photo, she knew right away that this kitten is destined to be a part of their life.

Well, surprisingly the cat had the same condition as Madden. Moon had a cleft lip, but he also had heterochromia iridium. It was as though they were made for each other. The whole situation seemed too perfect to be real. As it turned out, it was real.

And with the help of friends and strangers, Moon was safely brought to his new home. The minute they saw each other, it was clear that this was a once-in-a-lifetime connection. They were destined to be best friends. And finally, after so much time, life brought them together.

Madden rescued this cat from the streets of Minnesota, and Moon rescued Madden from his loneliness. Moon became a big part of Madden’s life and showed him that being different is a gift from God.  Madden’s mom is confident that adopting Moon will actually help her son gain more confidence and understand what true and unconditional love feels like. 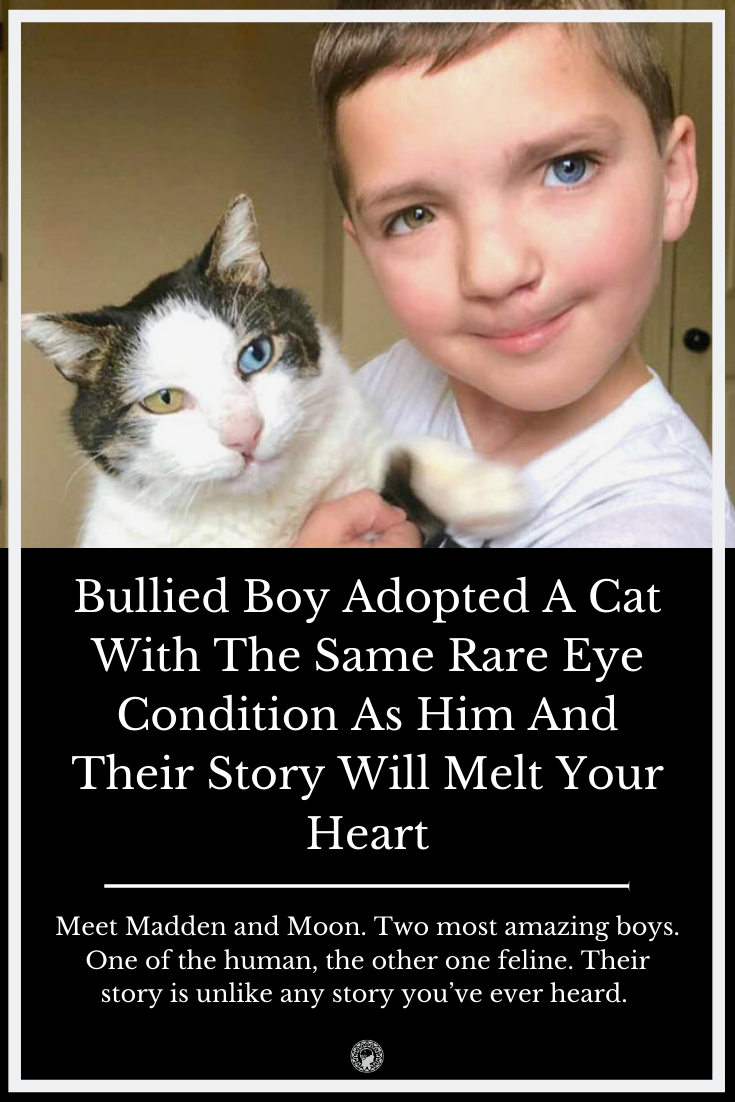