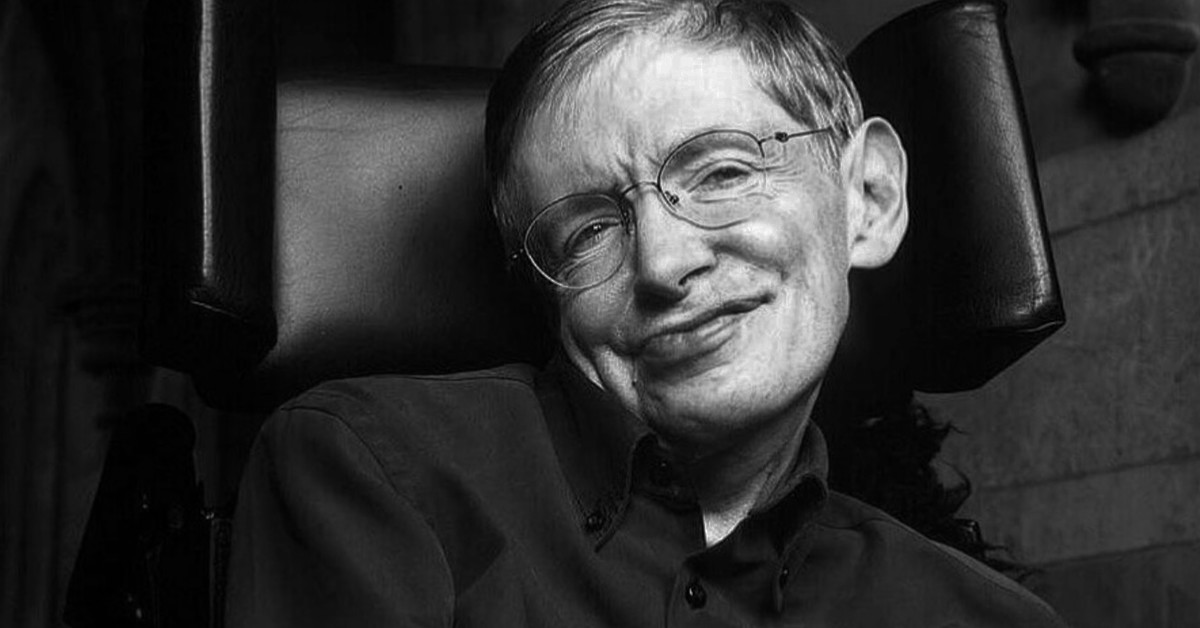 Stephen Hawking, a pioneering theoretical physicist, cosmologist, and best-selling author is one of the greatest minds of all time. He was most famous for his work on relativity and black holes.

He shocked the scientific world by showing that black holes emit radiation, and this discovery is known today as Hawking radiation.

In 1988, he wrote the groundbreaking, bestselling book A Brief History Of Time by which he made an outstanding, unparalleled contribution to cosmology and theoretical physics.

Hawking wrote the book to help readers who don’t have prior knowledge of scientific theories understand fundamental questions of our existence and the universe, such as: what forces govern the universe? Why did it begin? Is it possible to end, and if so, how? And most importantly, he tried to answer “the big question: Where did the universe come from?”

When he died on March 14, this year, the world undeniably lost one of the most brilliant men who has ever lived on planet Earth.

And many say there are no coincidences in life. Yet, when it comes to Hawking, there’re many things in his life that simply can’t be overlooked.

Namely, the dates of his birth and death align with those of two most revolutionary scientists. Hawking was born on January 8, 1942, in Oxford, right on the 300th death anniversary of Italian astronomer and physicist Galileo Galilei, who is regarded as the “father of modern physics and observational astronomy.”

March 14 is also celebrated as Pi Day around the world, in honor of the mathematical constant Pi (π) whose first three digits are 3, 1, and 4.

Of course, all this caught people’s attention on the social media: 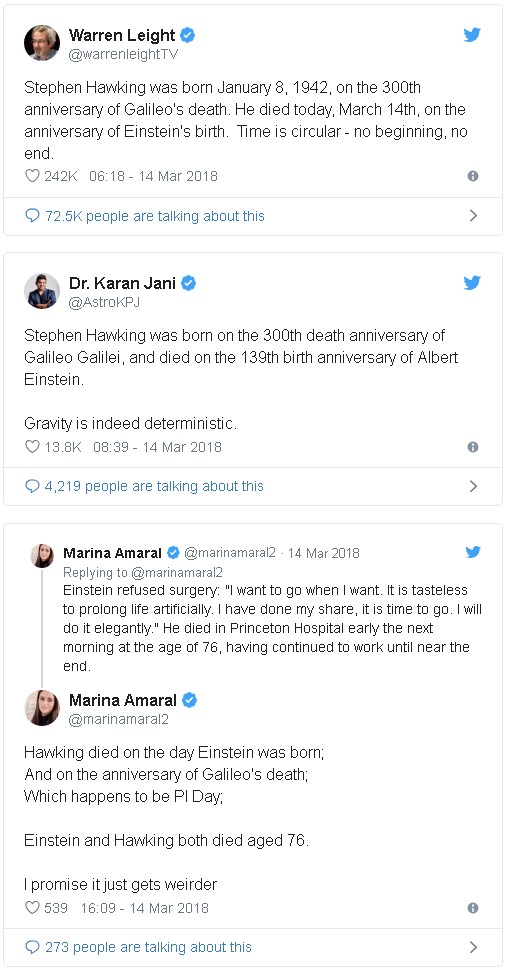 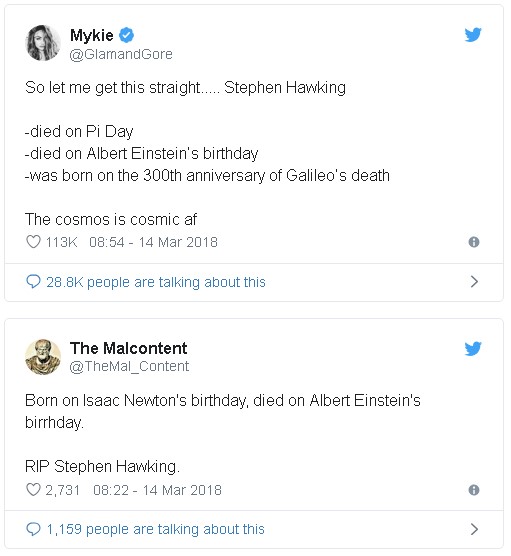 This legendary physicist was also known for suffering from amyotrophic lateral sclerosis, a type of motor neurone disease, that left him almost completely paralyzed. When he was diagnosed with this condition at the age of 21, doctors gave him only two years to live. Yet, he managed to prove they were wrong.

Leo McCluskey, an associate professor of neurology and medical director of the ALS Centre at the University of Pennsylvania says:

“One thing that is highlighted by this man’s course is that this is an incredibly variable disorder in many ways. On average people live two to three years after diagnosis.

But that means that half the people live longer, and there are people who live for a long, long time. Life expectancy turns on two things: the motor neurons running the diaphragm—the breathing muscles. So the common way people die is of respiratory failure.

And the other thing is the deterioration of swallowing muscles, and that can lead to malnutrition and dehydration.

If you don’t have these two things, you could potentially live for a long time—even though you’re getting worse. What’s happened to him is just astounding. He’s certainly an outlier.”

Despite his condition, this extraordinary man didn’t let his disease, which confined him to a wheelchair for most of his life, take away his intellectual abilities and strength.  As he beautifully put it: “I want to show that people need not be limited by physical handicaps as long as they are not disabled in spirit.”

Hawking left three children behind him: Robert, Lucy, and Tim. They said in a testament:

“We are deeply saddened that our beloved father passed away today.

He was a great scientist and an extraordinary man whose work and legacy will live on for many years.

His courage and persistence with his brilliance and humor inspired people across the world.

He once said, ‘It would not be much of a universe if it wasn’t home to the people you love.’

We will miss him forever.”

And how greatly respected and admired he was and still is in the scientific world, I think, is best shown by the British cosmologist and astrophysicist, and Hawking’s longtime colleague as well, Martin Rees:

“His name will live in the annals of science; millions have had their cosmic horizons widened by his best-selling books; and even more, around the world, have been inspired by a unique example of achievement against all the odds — a manifestation of amazing willpower and determination.”

Rest in peace, brightest star. You will be greatly missed.