Narcissists-those loving, charismatic admirers of nothing but themselves! How many of you have fallen on your knees in front of them-charming deceivers? No shame. No fear. Nobody blames you.

Narcissists can make you feel adored like you are reaching the top of the world when in a matter of fact, you become their toy. A slave to their big manipulative ego. You become nothing but another victim.

Narcissists know how to pick their victim. They just feel it (if they have any feelings after all). And they do it so carefully. Their victim mustn’t have the same traits as theirs; Otherwise, how will they survive?

You, you get emotionally helpless, worthless, crushed in a never-ending pain. Alone. No solution. No escape. Traumatized. These manipulative creatures are like vampires that soak your blood and leave a scar for a lifetime.

Narcissists seem to play mind games using a language which only they can understand. This is how you will recognize their hidden manipulative language.

It happens at the beginning of narcissist’s relationship with the victim. When the victim still hasn’t revealed their true face. The narcissist will attack the victim with soft words like “You can trust me”.

They will be happy to gain your confidence. You serve them all your flaws, difficulties, happy moments, past relationships. Once you reveal the true version of yourself to them, they will use it to provoke and attack you later.

THE MYTH OF ETERNAL LOVE

They will swear on eternal love! They will shower you with thousands of sweet words. “You are the best thing that has ever happened to me”, “I’ll love you until the end of my life,” “Our love is special!” are words that will totally melt your heart… or break later.

Once you are convinced of their “love”, they become more excited to follow with their manipulative game.

Narcissists never say what they mean. They never mean what they say. It’s that simply complicated.

A narcissist doesn’t like to be criticized. Ever. Therefore, they will confuse the victim with “I never said that” “That wasn’t what I meant” or “I was just joking”.

Once you get confused about their true words and intentions and have no clue what to say or do, narcissists will use it to gain the power; their word will be the last.

YOUR SECRETS-THEIR WEAPON AGAINST YOU

Let’s go back to the beginning. Do you remember that initial phase when the victim opens themselves to narcissists? Now it’s time for them to throw everything at your face! No mercy.

Narcissists will use your insecurities and past scars against you. They can’t wait to do that. They will use all the information to offend you: “You are too needy,” “You are too sensitive.”

In other words, they have no empathy and are not bothered by your feelings.

THE HIDDEN ART OF COMPLIMENTS

Nobody can make you feel so great as narcissists can! Their compliments and praises will bring you to the moon and back. And they are false. Abusive. Nothing but a huge lie and deception.

“I like your look tonight, but you were wonderful yesterday.” Not even close to honesty! They criticize you using a softer voice. And they do it for their own purposes only.

When a narcissist does something wrong, they will blame you. Just because it’s easier. “Stop psychoanalyzing me.”, “You are ridiculous!” are the words you will hear from them often.

In the end, you will find yourself as you are the one who did something wrong when you aren’t.

Narcissists are ready to bring their victim to insanity. You will start to question your own reality. They automatically become your idol and you are the one seeking an approval from them as they know everything.

Once they gain their power over you, they start to accuse you: “You are crazy,” “You’re making that up.”

In the end, remember, narcissists can get loud or quiet using their language; all in all, they won’t hesitate to do everything to reach their goals.

Narcissists are real psychopaths. Their behavior can lead you to anxiety, depression, even suicide.

Feel free to share this post so everybody can recognize their hidden language and be able to save themselves.

If you find yourself as their victim, know that it’s never too late to escape the narcissists’ manipulative trap. You can do it. 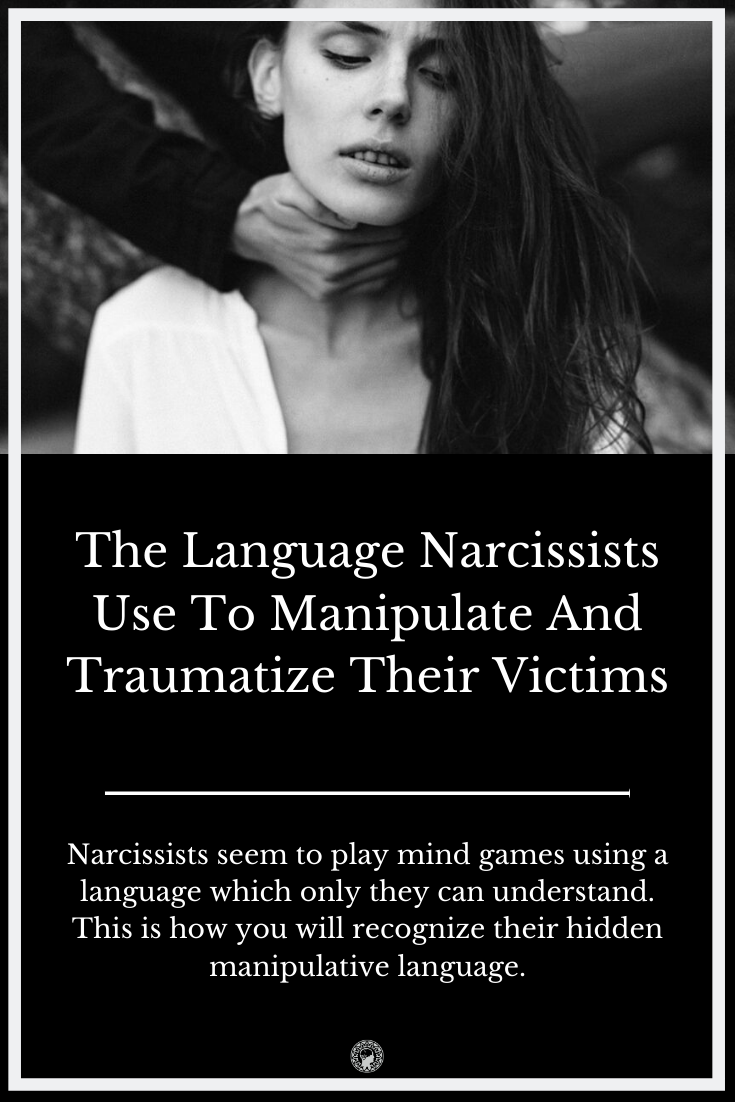