No matter how hard you try to imagine what a sociopath would look like, know that these sneaky chameleons are the best at hiding their dangerous personality traits. Moreover, you can be surrounded by one even now and still don’t be aware of their vile character.

Sociopaths have no regard for other people’s opinions and feelings. They think only about their own personal gain. To get what they want, they’ll put on an innocent, loving face and start playing devious mind games with you and using all sorts of abominable lies. They know how to cover everything up so that you don’t see their evil personality.

Unfortunately, sociopathy has become a common antisocial personality disorder. This means there’s a great probability that you may be in an everyday contact with a person that has sociopathic traits. Your boss, a coworker, a neighbor, or a friend can fit into this category and you might still be unaware of their dark side. The reason for this is that these people have many faces, each one suitable for a different purpose. They may trick you into believing that they’re the nicest people in the world.

They also want to be dominant and control you. When they gain total control over you, it becomes easier for them to get the things they want from you, be it money, job, sex, fame, you name it. They’ll stop at nothing to achieve their goals because they’re unable to feel guilt or remorse.

Why are they dangerous?

Sociopaths lack conscience and empathy. That’s why they won’t care if they shatter your self-confidence and make you feel powerless and unworthy. A sociopath can suck the positive energy out of you, discourage and make you doubt your logic and sanity. They’ll have no mercy on you.

That’s why it’s important for you to be able to recognize the subtle signs that someone is a sociopath and avoid falling into their toxic trap. Bill Eddy, a therapist, recommends using the WEB Method which can help you find out if you’re dealing with a sociopath.

This method requires that you pay attention to these 3 things:

They know what words to use to achieve what they want. By using the right words, they can pretend to be kind, generous, and sweet, when in fact, they’re only trying to hide their cruel personality and true intentions. So, they’ll praise you, come up with great stories, make important plans and promises, with no intention of ever fulfilling them.

They use highly positive words: When I’m with you, you make me a better person! You’re the best! You’re the smartest and most beautiful person I’ve ever known! I’ll help you travel the world!

To make themselves look innocent, they’ll shift the blame onto you. To do that, they use highly negative words: You’re a liar! You made me lose my trust in you! You’re useless! You’ll never get a job! I’ve always been good to you and this is what I get from you!

They will also move between two extremes: They’ll praise you one minute and belittle you and make you feel unworthy the next one. In this way, they manipulate you to get what they want from you.

If you have unpleasant feelings that there’s something wrong and not normal about the way someone behaves and treats you, trust them. Be careful when you read someone’s personality as often what your mind tells you won’t be in accordance with the following emotions:

You will feel fear.

Oftentimes, their presence will make you feel uneasy and you’ll often fear that they could hurt you. Make sure you find out what kind of a person they really are.

You can fall in love with them.

A sociopath can charm you into falling in love with them because they can be very affectionate towards you and use sweet and positive talk. They can talk about themselves in ways that will make them look like the most skilled and intelligent people. Be careful not to fall into their trap.

You can feel great sympathy for them.

A sociopath won’t hesitate to tell you that they’ve often suffered and have been hurt if they notice that you’re too sympathetic or vulnerable. By being manipulated in this way, you can easily consent to do something which is against your moral and social values and principles.

That “Actions speak louder than words” is not a cliché when it come to sociopaths and it’s something you should always bear in mind. They behave in ways that normal people would find awkward.

They don’t have regard or compassion for other people’s pain and suffering, and moreover, they often feel that they have the right to treat others harshly. If you ever find yourself talking with a sociopath, it’d be much better for you if you try to behave stable and leave the conversation rather than angrily responding to their provocations or showing that they upset and annoy you.

Empathy is just another noble trait sociopaths don’t possess. That’s why they won’t think twice before they start laughing at someone who’s suffering, be that in a movie or in front of their eyes. They aren’t moved or disturbed by the pain of people and animals as well. Moreover, they find this enjoyable.

It frequently turns out that most sociopaths behaved in dangerous and socially unacceptable ways when they were kids. Hurting animals, inventing an incessant series of lies, stealing material things, and you name it are things that sociopaths often got involved in in their childhood. 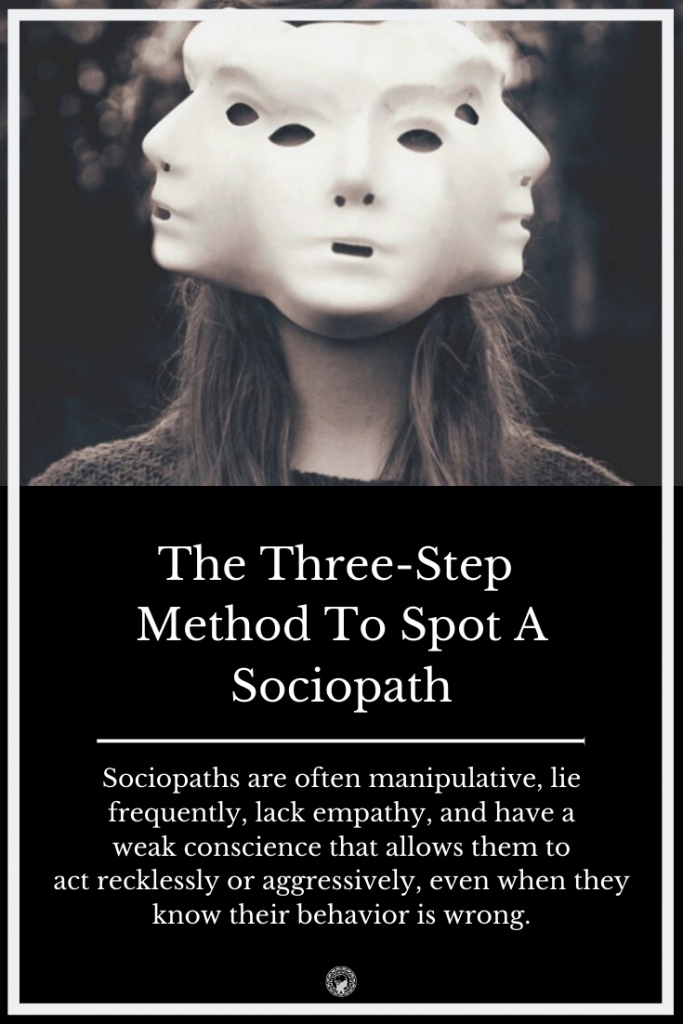