There’s nothing wrong with knowing how much you deserve and fighting for your own rights. We should all look up to these types of people.

Strong women are the pillars of the earth. They know their worth, they stand up for themselves, they don’t put up with other people’s issues and they simply refuse to let others take control of their lives.

In a nutshell, strong women are the ones who give us the courage to never give up.

But, there’s something about these beautiful human beings that I just don’t get.

They might have everything going for them, but when it comes to love, they have a hard time finding a special someone who would love and cherish them for exactly who they are.

Why is it so difficult for these amazing beings to find love?

Well, I figured it’s best to spend some time discussing this subject with some of the women in my life. And this is what I’ve found out so far.

1. MOST MEN ARE INTIMIDATED BY INDEPENDENT WOMEN

You might be fascinated by the energy these women radiate with, but believe me, not all men out there respect them for what they are – fearless warriors. The sad truth is… most men have very fragile egos and conservative, traditional values, so as a result, they are easily intimidated by women who are not afraid to speak up for themselves.

2. STRONG WOMEN WOULD NEVER SETTLE FOR JUST ABOUT ANYONE

These women have been through a lot in life. They’ve put up with all kinds of relationships, partners, and disappointments to finally realize that it simply isn’t worth it. From that moment on, they promised themselves that they would never settle for just about anyone.

3. THEY DON’T NEED A MAN TO FEEL COMPLETE

More importantly, strong women are whole on their own. They don’t see relationships as a way to complete themselves, but rather as a part of their life that should only make them even happier than they are.

4. MOST OF THEM PRIORITIZE THEIR CAREER OVER ROMANTIC LOVE

However, one of the reasons why they usually struggle to find their significant other is the fact that most of them often prioritize their careers and goals over romantic love. These women usually have a lot going on, so as a result, it is very hard for them to leave everything else aside and focus entirely on the relationship. After all, it is all about their priorities and their choices.

5. STRONG WOMEN ARE NOT AFRAID TO EXPRESS THEIR EMOTIONS

These women know exactly what they want in life, so when they really like or love someone, they don’t hesitate to show those feelings. Strong women don’t have time to play childish hard-to-get games. They don’t have time to pretend like they don’t care. When they meet someone they truly like, they go all in. However, not every man knows how to handle this kind of boldness. And so, most of them are threatened by these independent women.

6. THEY WON’T PUT UP WITH MEN WHO TAKE THEM FOR GRANTED

They are not used to being treated like doormats. Strong women don’t tolerate such rude and disrespectful behavior. They speak their mind and they’re not afraid to leave people who mistreat them, even if they eventually end up all alone.

7. THEY NEED TO BE WITH SOMEONE WHO WOULD CHALLENGE AND SUPPORT THEM

Strong and independent women are looking for a man who would be 100% supportive of their individual journey, someone who would hold their hand and fight beside them. They want a man who would never stop challenging them.

8. THEY KNOW THEIR WORTH

No matter how lonely they sometimes feel, they never let their temporary feeling weigh them down and force them to settle for something average. Strong women stand their ground and stick to their core values. They want a man who would treat them like they deserve to be treated. Someone who would support them every step of the way. 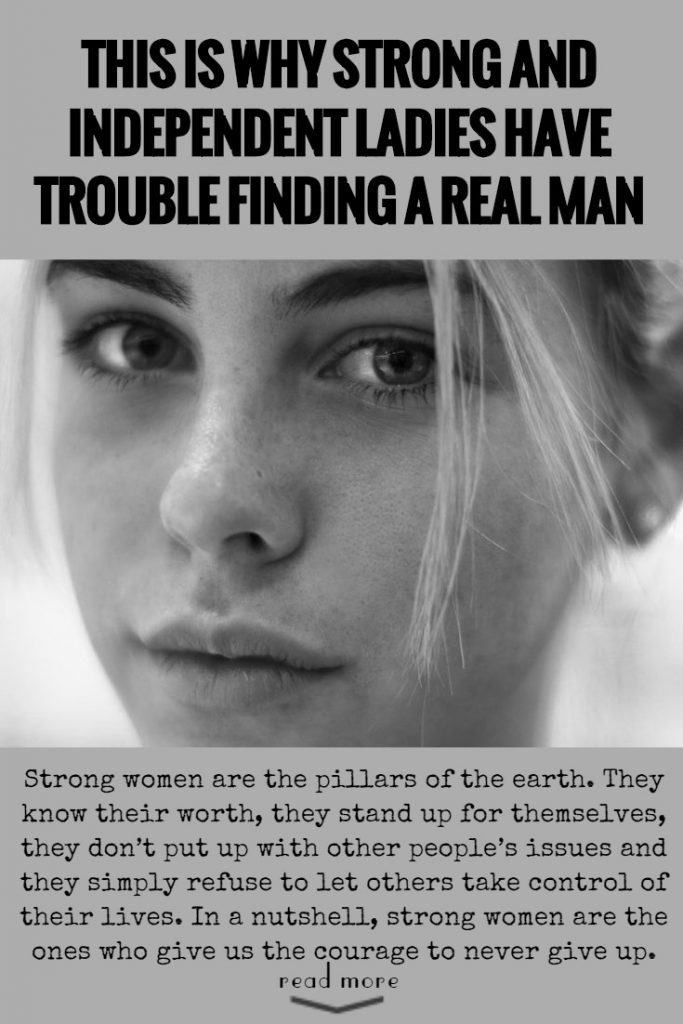