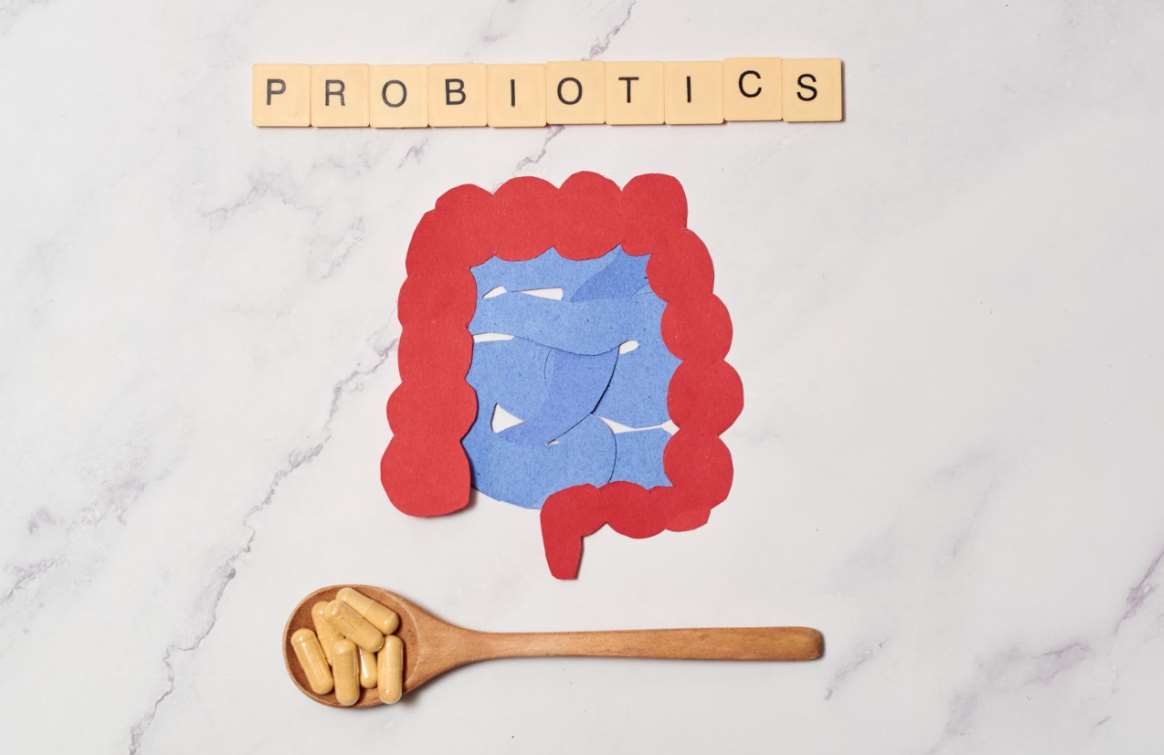 In recent years we have been lucky enough to learn the importance of gut health on the entire body. Probiotics may be able to help digestion, immunity, and even mental health through the gut and brain axis.

A modern western diet containing ultra-processed, sugar, fried foods can over time and disrupt the microflora in your gut leading to issues.

With a staggering 95% of the body’s serotonin “happy chemical” produced in the intestine probiotic supplements may be to work through what is known as the gut and brain axis. Your gut may be able to send neurochemical signals from the gut up to the brain resulting in increased happiness or less anxiety. Clinical reviews have shown links between poor gut health and mental illness with many people with depression also having imbalances in good versus bad bacteria. This proves that there is indeed a link between gut health and mental health. Different probiotic strains work differently, and it can take up to 30 days for probiotic bacteria to modulate the gut in a way that can benefit your mental state.

2) You Get Sick Less

Often It’s not just serotonin that comes for the gut with upwards of 70% of the immune system cells also said to be found in the gut. If your gut is in poor health the it’s also likely that you will get colds & flus more often because of how vitamins like vitamin c & nutrients like zinc are absorbed in the gut.

Taking a probiotic supplement, a couple of months before flu season may give it your gut enough to start working by producing IL-10 p that can help lower the inflammation giving the immune cells the best chance at protecting your body from viruses. If next flu season you find that you don’t get sick after trying probiotics, then there is a good chance it is because they have worked.

Probiotic strains like Lactobacillus Acidophilus have been studied extensively in humans with one clinical trial from 2017 showing that the Lactobacillus Gasseri CP2305 probiotic strain taken daily for 4 weeks was able to beneficially influence the quality of life in patients with Irritable Bowel Syndrome because of its efficacy on the symptoms. Keep in mind that probiotics can initially cause symptoms like diarrhea whilst your microbiome adjusts to the new probiotic bacteria entering the gastrointestinal tract.

The study showed that participants had an improved quality of life because their diarrhea lessened and stool consistency changed. If you find that your poops aren’t always solid or

The healthy vaginal microbiome should be home to billions of friendly Lactobacillus probiotic bacteria but in an unhealthy person, it made instead be overrun by Candida Albicans fungus that results in conditions like bacterial vaginosis. If you have this then it may result in a foul smell or itchiness.

Typically treatment includes antibiotics which may be beneficial in killing out any pathogens causing the infection. At the same time, the antibiotics may also kill the friendly lactobacillus bacteria that can crowd out the bad bacteria creating a healthy environment for the vagina. If after taking a probiotic supplement you notice a better-smelling private area, then that’s a sure sign.

Just like in the probiotics for mental health studies where it was shown those suffering from mental health issues had different microbiota profiles compared to healthy individuals. Remarkably it was also found that those with healthy lean bodies had different types of bacteroidetes bacteria versus control groups of obese people who had more gram-negative species of pathogenic bacteria.

These findings potentially show that by altering an unhealthy gut microbiome you could also alter your body weight. It was suggested that some of the bad bacteria found in obese people were able to work through the gut and brain connection we discussed earlier. Instead of sending signals to eat healthily, the bad bacteria can send signals to eat more junk processed junk food with high sugars. This negative loop can worsen gut health whilst increasing body fat.

How Long Does It Take for Probiotics to Start Working?

Now you know the most common signs that show probiotics are starting to work in your microbiome you probably want to know how it takes for the bacteria to start. The answer to this question first depends on what probiotic strains you are ingesting, the CFU count, and for what specific condition.

This study for example shows that Lactobacillus Reuteri (DSM 17938)started showing increased bowel movements in SIBO patients at 4 weeks whilst other studies like this one carried out on acne patients showed the probiotic working at around 3 months. Generally speaking, benefits for pro-anti-inflammatory cytokines may take longer at 1 to 2 months whereas poop changes could be as quick as a couple of days.

Why A Probiotic Sometimes Doesn’t Work

If a supplement company promises that their probiotic supplement will bring guaranteed health results they are breaking the law and lying because the facts are that they don’t work for everyone and they should not be used as a medical treatment due to lack of clinical research in humans at without a doctors diagnosis.

Different probiotics will work in different ways so you may need to try different brands until one works. Another mistake people make is forgetting about prebiotic fiber which is essential for probiotic bacteria to survive.

If you are gut is already in good health with no dysbiosis then it’s likely that probiotics will have no effect as there is nothing to fix.

Taking the probiotic supplement with acidic foods like vinegar or boiling water may also kill the probiotic bacteria before it even reaches your large colon.

If your probiotic supplement is working don’t despair, you may need to either give it more time or try some different strains. If you are already in good health and eat a lot of fermented probiotic foods, then you may already have a diverse microbiome that doesn’t need any more probiotic bacteria.

Following the tips in this blog post may be helpful but if you have any health conditions it’s imperative that you talk to a qualified doctor and follow all prescribed treatments. Probiotics are not intended to treat or cure medical conditions immuno-compromised people should not take them. The content in this post was not written by a doctor.