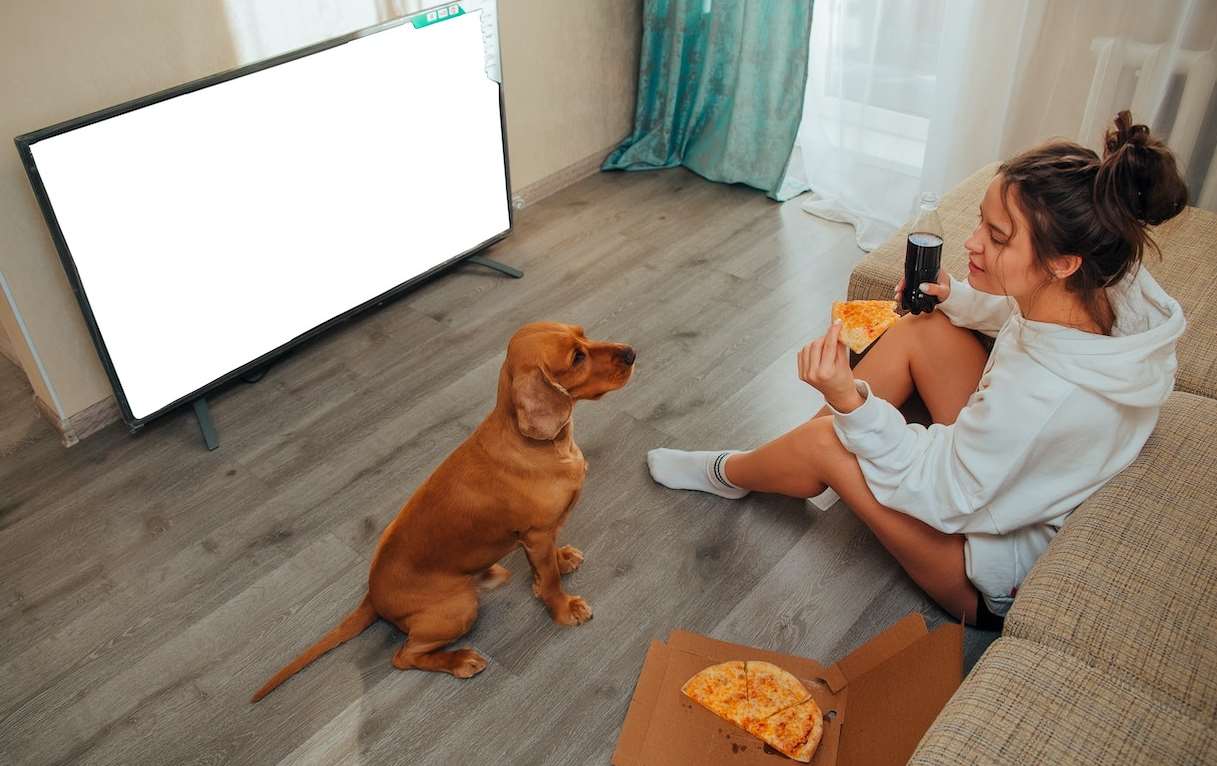 If your dog is particularly close to you and has never experienced your absence, leaving them alone at home may be hard. It is especially true of strays or adopted animals being passed on about the household as family pets.

Many dogs with separation anxiety benefit from the soothing noise of a radio or television. Puppies think you’re the most significant thing ever while you’re around. They will follow you anywhere because they have become accustomed to you taking care of them. They are just trying to keep themselves engaged in your absence.

In contrast to humans, dogs only catch fleeting glances of TV screen images and lack the visual acuity required to follow fast-paced action. They don’t see a continuous stream of events but relatively short, sharp spurts. Dogs won’t pay as much attention to the TV as they would to real-world stimuli because of the lack of olfactory stimulation.

When the TV is on, does your dog get anxious?

It is a question that you can only answer after thinking about your dog.

Some dogs enjoy hearing human voices, even if they originate from the television, while others find it quite disturbing. Finding out which of these two options your dog prefers is a must for giving a definitive answer to this inquiry.

The best way to do this is to set up a camera system, such as a spy cam or a pet camera, and watch what they do when the TV is on and off. Instead of shelling out cash for a camera, you can always play around with different what-ifs to get a sense of the damage that it might do to your home.

Whether or not you should leave the TV on while at work depends on your dog’s reaction to the loudness. You should also keep dog insurance as an option.

Can a dog learn anything from the television?

The benefits of leaving the TV on for your dog go beyond mere entertainment. None of these advantages will help if your dog is terrified by the loudness.

Television can help drown out disturbing noises like construction, fireworks, thunder, or gunfire. The TV will be the sole source of noise in the room, so your dog won’t be frightened by anything else. Although a Thundershirt (a jacket designed to reduce anxiety in dogs) or medication may help with anxiety, watching TV is unlikely to have the same effect.

Another tactic for making it look like someone is home when they are not is to leave the television on. If potential burglars notice this, they might think twice before breaking into your home to steal your pet or other valuables. This way, the TV might be observed as a second set of eyes. (1)

Do I risk harming my dog by leaving the TV on?

As we’ve already mentioned, the main disadvantage is that it could make your dog more anxious than being left alone in peace.

Permanent hearing loss could be a result of the noise. Because dogs have excellent hearing, you shouldn’t leave the TV on at full blast while you’re gone. However, if it is played too softly, it will compromise its sound-masking properties.

Is there a reasonable length of time to leave the TV on with my dog?

Rather than using the television to block out distractions or to keep your pet company, numerous experts advise that you should consider the television’s sound to be an alarm.

Similarly to how your dog could enjoy the sound of keys being twisted in a lock, you want your dog to enjoy the sound of the TV being turned on or the TV itself. If people expect something good to happen, they will likely find solace in the TV’s hum.

If you give your dog a treat whenever you turn on the TV, it may come to associate that sound with good things. Turning on the TV could become a source of reinforcement they look forward to.

It can help ease the transition into the day, and your dog will appreciate the same shows you enjoy.

What else can I do when watching TV to keep my dog comfortable?

The content that dog-oriented channels like DogTV choose to air is supposedly curated with the help of complex data about what dogs enjoy watching. They are more reliable for keeping your dog calm and quiet while you are away. You can curate a playlist of songs appropriate for dogs. (2)

If you’d rather not watch TV, listening to the radio is a good alternative. One study found that they preferred listening to reggae and soft rock instead of the television while the owner was out.