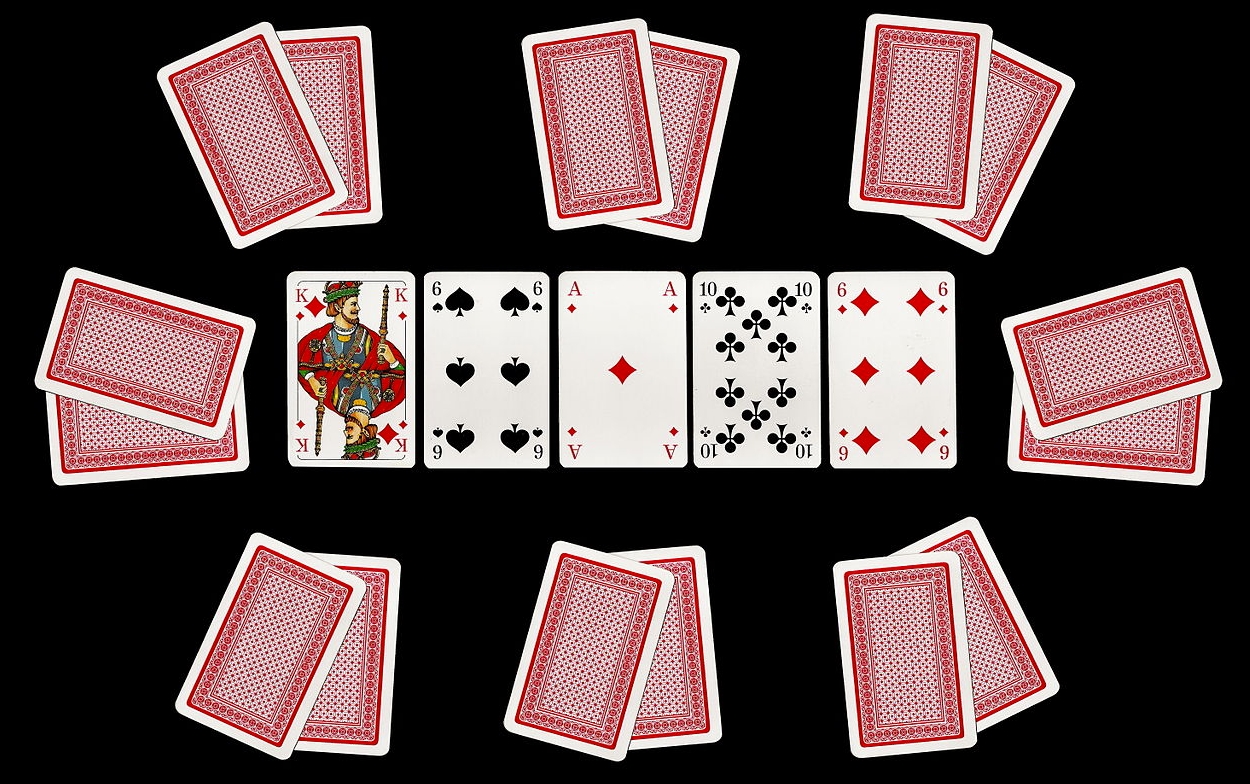 There is a story of the Chinese emperor, Mu Tsung, in the 10th century who played a domino game with his court that resembles the game of poker. The domino was not made of small hard squared pieces, but hand size cards with some roots that resembled the modern card game.

However, this is not the only origin story for the game of poker. There is ancient Persian card game called “As Nas” from the 16th century, and Indian named “Ganijifa”, the English game called “Bragg”, and the official root for the game of poker from Spain, “Primero”.  The all have a timeline connecting them from the Chinese game to the modern version of Poker Holdem, so let’s take a look at the evolution of Chinese dominos game into what could be today’s Poker games.

The earliest reference to a game with poker’s traits comes from 10th century China. The emperor, Mu Tsung, played a domino-like game printed out on cards, or leafs that were used as cards. Mahjong and Pai Gow poker probably derived from this game as well.

In the 16th century, a card game called Ganijifa in India, or Ganjifa in Persia, shows up in both India and Persia. There is a theory that Ganjifa might have its origins from the domino game that Mu Tsung used to play, and was brought by traders trough the Silk Road into India and then Persia. The word “Ganjifa” is similar to the Chinese word for playing card, a piece of evidence it came from China. Ganjifa’s card evolution is one more step closer to modern day playing cards.

As-Nas seems to be a more modern variant of Ganjifa played in 17th century Persia. It added decks of twenty and 25 cards and had 5 suits instead of the modern version of 4, a pretty good clue of the origin of poker now that it resembled more. These hand-made card games were so beautiful in design that they are held in museums along with other Persian artifacts of historical wonder, like the ancient Greek Mosaics from Zeugma.

Either Ganjifa or As-Nas could´ve made its way to Europe, where the Spanish might have used its roots for poker´s closer variant, Primero.

Primero originated in Spain in the 16th century. It featured three cards dealt to each player and bluffing was an essential aspect of the game. The game caught popularity in France buy the 17th century with a new name that clearly resembles its modern evolution, Poque. Poque became quite popular in Europe and the Germans began calling it Pochen.

French colonist exported Poque to their settlements in North America, predominantly to New Orleans and surrounding areas. When these territories became part of the United States in 1803, English settlers renamed the game to “Poker” and changed some aspects, including 5 cards per player and a 52 –card deck.

From here on, poker’s history is well documented in the Wild West through the Mississippi River into the rest of the country. Its classic popularity stems from crews of riverboat sailors and passengers playing the game during their journeys, and soldiers from the Civil War played it in their camps. Wild West saloons offered poker as one of the main pastimes in the frontier settlements from 1870´s.

In 1871, poker made its way back to Europe through the U.S. minister in the U.K., who explained the game to Queen’s Victoria court and herself, but the popularity in the old continent happened thanks to American soldiers playing the game all over the land during World War I.

Poker Holdem was not the version played back then, that one is rather modern. Five-card draw and seven card stud were the played versions. Texas Holdem rose to power in the 1970´s when it became the featured game in the World Series of Poker, and then became a world-sensation thanks to T.V. broadcasting of this event in the late 90´s and online poker.

If poker originated from China, it’s still up to debate. It could´ve been a similar game, or roots from it made it to Spain as suggested by some historians. It’s certainly possible.